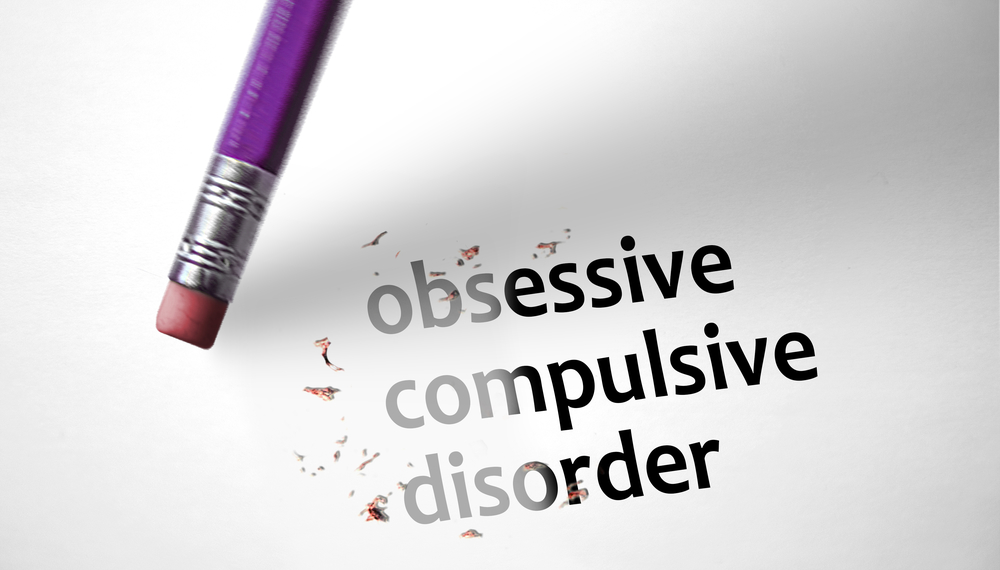 Obsessive-Compulsive Disorder (OCD) is a common, chronic and long-lasting disorder in which a person has uncontrollable, reoccurring thoughts (obsessions) and behaviors (compulsions) that he or she feels the urge to repeat over and over.

People with OCD may have symptoms of obsessions, compulsions, or both. These symptoms can interfere with all aspects of life, such as work, school, and personal relationships.

Obsessions are repeated thoughts, urges, or mental images that cause anxiety. Common symptoms include:

Compulsions are repetitive behaviors that a person with OCD feels the urge to do in response to an obsessive thought. Common compulsions include:

Not all rituals or habits are compulsions. Everyone double checks things sometimes. But a person with OCD generally:

Some individuals with OCD also have a tic disorder. Motor tics are sudden, brief, repetitive movements, such as eye blinking and other eye movements, facial grimacing, shoulder shrugging, and head or shoulder jerking. Common vocal tics include repetitive throat-clearing, sniffing, or grunting sounds.

Symptoms may come and go, ease over time, or worsen. People with OCD may try to help themselves by avoiding situations that trigger their obsessions, or they may use alcohol or drugs to calm themselves. Although most adults with OCD recognize that what they are doing doesn’t make sense, some adults and most children may not realize that their behavior is out of the ordinary. Parents or teachers typically recognize OCD symptoms in children.

If you think you have OCD, talk to your doctor about your symptoms. If left untreated, OCD can interfere in all aspects of life.

Note for Health Care Providers: There are comprehensive and validated screening instruments for quantifying and tracking signs and symptoms of OCD. One example is the Yale-Brown Obsessive Compulsive Scale (Y-BOCS), which you can find on the Anxiety and Depression Association of America (ADAA)* website. Another example is the Florida Obsessive-Compulsive Inventory.

This listing is not comprehensive and does not constitute an endorsement by NIMH.

*ADAA is an NIMH National Partner.

OCD is a common disorder that affects adults, adolescents, and children all over the world. Most people are diagnosed by about age 19, typically with an earlier age of onset in boys than in girls, but onset after age 35 does happen. For statistics on OCD in adults, please see the NIMH Obsessive Compulsive Disorder Among Adultswebpage.

The causes of OCD are unknown, but risk factors include:

Twin and family studies have shown that people with first-degree relatives (such as a parent, sibling, or child) who have OCD are at a higher risk for developing OCD themselves. The risk is higher if the first-degree relative developed OCD as a child or teen. Ongoing research continues to explore the connection between genetics and OCD and may help improve OCD diagnosis and treatment.

Imaging studies have shown differences in the frontal cortex and subcortical structures of the brain in patients with OCD. There appears to be a connection between the OCD symptoms and abnormalities in certain areas of the brain, but that connection is not clear. Research is still underway. Understanding the causes will help determine specific, personalized treatments to treat OCD.

People who have experienced abuse (physical or sexual) in childhood or other trauma are at an increased risk for developing OCD.

OCD is typically treated with medication, psychotherapy or a combination of the two. Although most patients with OCD respond to treatment, some patients continue to experience symptoms.

Sometimes people with OCD also have other mental disorders, such as anxiety, depression, and body dysmorphic disorder, a disorder in which someone mistakenly believes that a part of their body is abnormal. It is important to consider these other disorders when making decisions about treatment.

SRIs often require higher daily doses in the treatment of OCD than of depression, and may take 8 to 12 weeks to start working, but some patients experience more rapid improvement.

If you are prescribed a medication, be sure you:

Psychotherapy can be an effective treatment for adults and children with OCD. Research shows that certain types of psychotherapy, including cognitive behavior therapy (CBT) and other related therapies (e.g., habit reversal training) can be as effective as medication for many individuals. Research also shows that a type of CBT called Exposure and Response Prevention (EX/RP) is effective in reducing compulsive behaviors in OCD, even in people who did not respond well to SRI medication. For many patients EX/RP is the add-on treatment of choice when SRIs or SSRIs medication does not effectively treat OCD symptoms.

NIMH is supporting research into new treatment approaches for people whose OCD does not respond well to the usual therapies. These new approaches include combination and add-on (augmentation) treatments, as well as novel techniques such as deep brain stimulation (DBS).