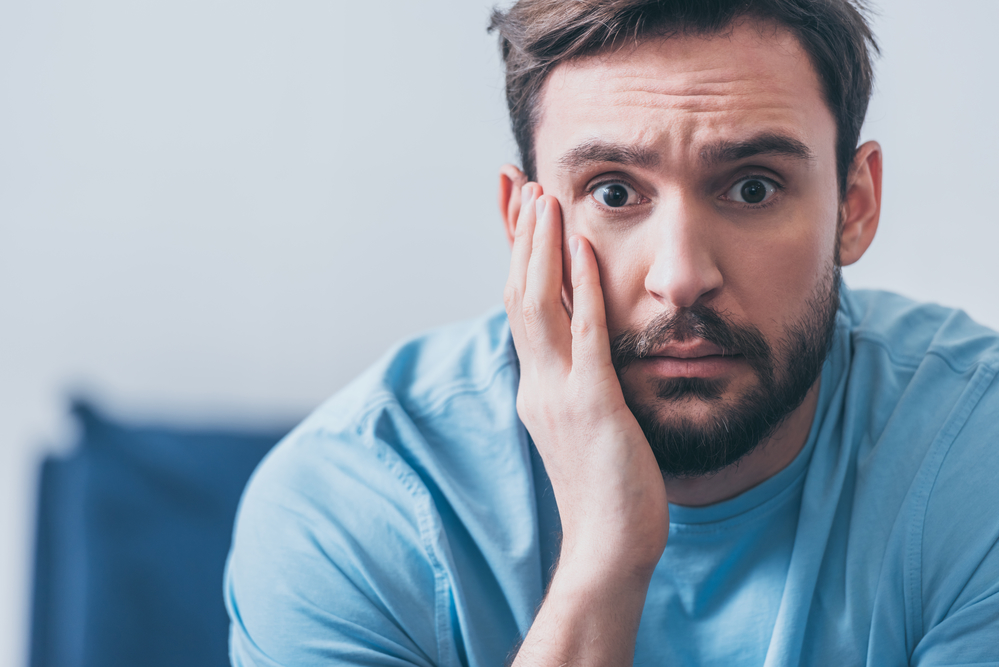 When a man explodes in anger over something seemingly insignificant, he may appear like just a jerk. But he could be anxious.

Anxiety problems can look different in men. When people think of anxiety, they may picture the excessive worry and avoidance of frightening situations that often plague those who suffer. These afflict men, too. But there’s a growing recognition among psychologists that men are more likely to complain of headaches, difficulty sleeping and muscle aches and pains. They are more likely to use alcohol and drugs to cope with anxiety, so what looks like a drinking problem may actually be an underlying anxiety disorder. And anxiety in men often manifests as anger and irritability.

Anxious “men may present as loose cannons, but they are worriers,” says Kevin Chapman, a clinical psychologist in Louisville, Ky. “Aggression tends to be more socially acceptable to many men than anxiety.”

Studies have found that about one in five men(and about one in three women) will have an anxiety disorder during their lifetime. But psychologists are increasingly concerned that those numbers underreport male cases.

This is particularly worrisome now that more research is finding a link between anxiety and suicide. Depression is the mental illness most strongly associated with suicidal thoughts, but it doesn’t often lead to suicidal acts, according to a 2010 study by researchers at Harvard University and Harvard Medical School. Instead it is anxiety disorders, along with substance abuse and conduct disorder, that are most strongly associated with suicide attempts; the link between anxiety and suicide has been echoed in more recent studies as well. Men are more than three times more likely to die by suicide than women, and suicide rates are on the rise in the U.S., according to the Centers for Disease Control and Prevention.

“People who are panicky and have a desire to escape from a situation they perceive to be intolerable, that could be the spark to act on their [suicidal] thoughts,” says Matthew K. Nock, a psychology professor at Harvard and an author of the study.

In general, men are less likely to receive treatment for mental health issues. “We’ve been socialized from a very young age to see emotional vulnerability as a weakness,” says Michael Addis, a professor of psychology and director of the Men’s Well-Being Research Group at Clark University in Worcester, Mass. “Seeking help is seen as a sign of weakness as well,” for some men.

Men may present as loose cannons, but they are worriers

Anxiety is a normal human emotion, of course. But it becomes a disorder when it is so severe and constant that it impairs a person’s life, interfering with work and relationships. Anxiety disorders and depression often occur together. The most well-researched and effective treatments for anxiety disorders are cognitive behavioral therapy, which teaches patients to alter problematic thinking that fuels anxiety and to actively approach situations they fear, and antidepressant medications like Prozac and Lexapro.

Aaron California had been anxious since childhood: He avoided parties and had intense anxiety before taking tests. At 19, he realized that anxiety was “ruining my life,” says Mr. California, now 31 years old and an aide in Moscow, Idaho, for people with disabilities. “It caused me to drop out [of college]. I ended up quitting my job,” because he was so afraid of making mistakes. Still, he resisted getting treatment because of “the stigma of being judged by others,” he says.

Men often seek treatment after a work crisis—or, especially, at the urging of a partner. But what is the best way to encourage a man to get help for anxiety? One thing not to do is deliver an ultimatum: That can lead to a power struggle and actually increase someone’s resistance to treatment. Instead, “highlight that their quality of life is suffering,” says Dean McKay, a psychology professor at Fordham University in New York and a past president of the Association for Behavioral and Cognitive Therapies. Tell your loved one that with effective treatment, “you’ll enjoy stuff so much more. We can enjoy each other more if you are able to manage this thing. That is pretty compelling.”

Dr. Addis suggests expressing your own distress about your loved one’s suffering, how you’re worrying, how you’re not sleeping. And above all, be compassionate. “Rather than seeing him as a sort of stubborn, unwilling typical man, try to start seeing them as a human being not only anxious and depressed but struggling with what they expect of themselves and what society expects of them,” he says.

Avoiding diagnostic labels may also help. Dr. McKay doesn’t mention the word anxiety during the first couple of therapy sessions with some men. Dr. Chapman says some of his patients are more comfortable calling treatment “coaching” or “help with performance” that is focused on “distress at work.”

Many men, of course, are comfortable discussing their emotions and using terms like anxiety and depression. Still, short-term, goal-oriented treatments that focus on changing behavior, like cognitive behavioral therapy, might be more palatable for many men. CBT usually involves 12 to 15 weekly sessions. “A more practical approach, a more coaching-oriented approach is going to feel more familiar to a lot of men,” says Dr. Addis. “It’s not a lot different than getting a golf lesson.”

John Borders had been struggling with panic attacks and troubling obsessive thoughts for years before his wife convinced him to see a therapist for anxiety and obsessive compulsive disorder. “I didn’t understand what was going on in my mind,” said Mr. Borders, a 54-year-old lawyer in Louisville. He then had two brief stints of therapy that he says weren’t very helpful before he started CBT and exposure and response prevention treatment (a version of CBT that is used for OCD) with Dr. Chapman. At that point, Mr. Borders had an intense fear of driving on highways. “My heart would race. I’d think I was going to run off the road.” So Dr. Chapman had Mr. Borders drive on highways, and, to up the anxiety symptoms even more, do so after drinking coffee. “I would drink a double shot of espresso and get on the highway and drive,” said Mr. Borders. “That really helped.”

Mindfulness practices like meditation can also be effective, and particularly useful for men who express a lot of frustration and anger in response to anxiety. Meditation “slows you down. You can make choices of action that are more premeditated,” says Douglas Mennin, a professor of clinical psychology at Columbia University Teachers College. Dr. Mennin also encourages group therapy, which can counteract the social isolation and loneliness that some men feel—and that can make anxiety worse.

Mr. California did get cognitive behavioral therapy and took medication. While he still deals with anxiety, he largely recovered and finished college and a master’s degree in educational psychology. Opening up to his co-workers and developing friendships, he says, has been critical, too. “Being able to talk to someone is anxiety-reducing,” he says. “It’s meant a tremendous amount to me to feel a sense of love and belonging where I’m no longer alone.”

—Don’t deliver an ultimatum. This can lead to a power struggle and increase his resistance to treatment. Instead, highlight ways his quality of life could improve with treatment.

—Convey your own distress about his suffering—how you are worrying about him.

—Be compassionate. Don’t view him as being stubborn, see him as a human being who is struggling with a heavy burden of expectations.

Resources for People Struggling With Anxiety

Anxiety and Depression Association of America

Association for Behavioral and Cognitive Therapies

Write to Andrea Petersen at andrea.petersen@wsj.com

Appeared in the July 31, 2019, print edition as ‘In Men, Anxiety Can Often Look Different.’